A quantum dot is a tiny semiconductor crystal particle that emits light under excitation (it exhibits both photoluminescence and electroluminescence) and so can be used to make display and lighting devices. Quantum dots were discovered in the 1980s and are being researched and used not only as display and lighting devices, but also for transistors, solar cells, laser diodes and many other applications. 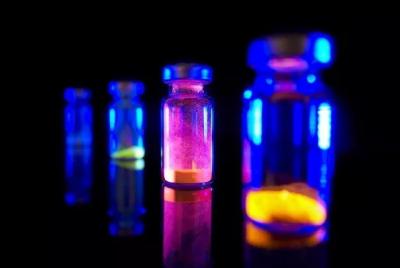 The electronic characteristics of quantum dots are determined by the size (and shape) of the particle—basically it means that the color of the light is determined by the size of the quantum dot and not the material it is made of. You need more energy to excite a smaller dot than a larger one—and more energy is released in the process, so you get a light that is closer to the blue end of the spectrum (and the larger the dot, the closer you are to the red end of the spectrum, or even further, as you can make infrared and ultraviolet dots).

One of the first applications of quantum dots was in QD-LCDs, where the QDs are used as phosphors to enhance the LED LCD backlight's color properties and efficiency (photoluminescence). Instead of using white light, you use blue LEDs and the QDs absorb it and produce red and green light. This is a relatively easy and cost-effective way to enhance LED LCDs. 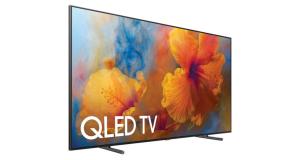 The first QD-enhanced LCD TVs were introduced by Sony (under the Triluminos brand, using QD Visions' QD films) back in 2013. QD-LCD adoption has been slow but started to surge in 2015 as several TV makers (most notably Samsung) launched QD enhanced TVs. QD-LCDs has had a lukewarm reception in the premium TV market. The main advantage of QD-enhanced LCDs is a very wide color gamut – even larger than the color gamut of current OLED TVs.

Samsung markets its QD-LCDs as “QLED” which is a confusing term, as usually QLEDs refer to direct-emission QDs, see below under the QLED section. Today most TV makers offer QD-LCDs at the top-end of their LCD TV range.

Samsung is developing a technology that combines quantum dots with OLED emitters. So-called QD-OLEDs are based on blue OLED emitters and ink-jet printed quantum-dots that convert the blue light to red and green.

While QD-OLEDs have a relatively complicated design with many layers, Samsung seems to have overcome the main technological challenges and the company announced it is set to convert an LCD TV fab to QD-OLED production in a $10.8 billion investment. If all goes well, Samsung could start mass producing such TV panels by 2021.

QLED (or QD-LED) refers to a Quantum Dot LED, which uses QD's electroluminescence to emit light. This display technology is quite like an OLED, but with a quantum dot layer instead of the OLED emitting layer. That is one of the advantages of this technology—the transition from OLED production to QLED production can be relatively easy.

QLED displays are being researched by several companies, including Samsung, BOE, Merck, CPT, TCL (CSoT) and LG. In February 2011 Samsung unveiled the world’s first Active-Matrix QLED display—a 4″ 320x240 panel. Samsung actually fabricated two kinds of panels—one on glass and one on a flexible plastic. In 2017 BOE demonstrated two Q-LED displays, 5" (320x240) and 14" (960x540), and in 2020 the company announced a 55-inch 4K AMQLED display.

QLEDs have several advantages compared to OLEDs, including higher efficiency and longer lifetimes, although these displays are not yet ready for commercialization.

One interesting development is Samsung’s Quantum-Rod (which are similar to QDs) technology, which the company may adopt in future QD Display generations which will sport a QNED emitter and a QD conversation layer (QDNED-QD display).